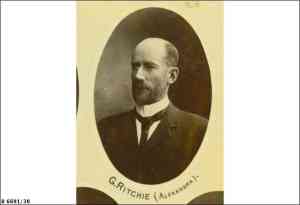 In the development of the Murray, the family name of Sir George Ritchie ranks with those of Hume, Cadell and Randall. George Ritchie, son of a River Murray trader and himself a river boat captain for half a lifetime, was born at Goolwa in 1864 and was educated at the Echuca Grammar School. After four years’ apprenticeship with a draper, he joined his father on the river. In 1884, two years after his father’s death, he entered into partnership with his two brothers as a steamboat owner on the Murray. Their first ship was the Pioneer.  In the course of his 40 years of active trading on the river, he owned about a dozen boats. But he turned to politics from about 1902 and in a long political career, he filled every Ministerial post as a Minister in both Houses of Parliament. He was Attorney-General in the Assembly and later Minister of Justice and Education in the Legislative Council. He was a strong supporter of the man on the land, an advocate of decentralisation, and a champion of River Murray development.

By 1919, he was an influential politician, and with Lock 1 construction underway at Blanchetown, discussions were taking place regarding the order the works would take place. Capt. George Ritchie, Member of the South Australian Parliament, recommended that instead of starting on lock and weir No. 2 after the completion of Lock No. 1, the Commissioners should allow work to start on Lock No. 3. This would give a back-up of water for 65 to 70 miles in the stream, giving a great stretch of higher water for both irrigation and navigation. Being considered an authority on the river, his suggestions were adopted. (1919 09 20 Cultivator)