continued from yesterday. The Register 30 May 1916.

Around behind a brown mass of cliff, with the primitive simplicities of rural homes, and healthy men and brave women and laughing children— who could be happier than they with a river frontage at their very doors and all the unfenced freedom of life — we came upon Blanchetown. It had grown into a centre of industry since we had seen it 12 months before, when His Excellency laid the stone at the lock site. There were a cluster of tin sheds, a concentration of river boats, and derricks shooting into the air. As we approached the landing we saw the stacks of timber, the 1,000-ft. span of the cable way, and the sleeping activities at the coffer dam. Then, among the crowd, shaped up the compact little figure and smiling face of Mr. Cutting, the supervisor of operations, who was soon conducting us over the busy scene. There was nothing to see, and yet there was a lot. Lock building is a mass of preliminaries. The start in getting a start is a big job. Take the work at the coffer dam. They have built around it a fence of interlocking steel on the outside and of stout timber inside. In this space spoil from the river is being built up into a wall, and when all the water has been pumped out the construction of the lock on the river bed will be begun. The digging is done by steam shovels, which empty into the barges. These take the material over to where the scoop is working, dump it in the river again, and then this machine goes down and picks it up and drops it between the walls of the dam. A long journey, but the engineers call it a short cut, and they ought to know. (to be continued) 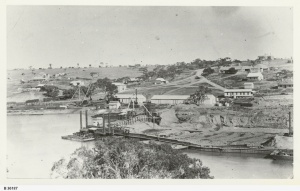 State Library of SA B-36187 Lock 1 cofferdam and Blanchetown in distance.