MLA Peter Crisp with Helen and her book

On Monday July 6, 120 people attended the Mildura launch of the River Murray book by Helen Stagg. The Carnegie Centre was filled to capacity and extra seating was brought in. Mildura and District Genealogical Society President Lyn Grant welcomed those present and introduced Brian Grogan OAM who spoke of his involvement with dam works in Victoria in the 1970s. There were parallels he believed in the tight social fabric of the work-camps, just as had been the case in lock camps many years earlier. He mentioned the importance of social histories of these works and commended Helen on her research. He then introduced author Helen Stagg who gave a slide show presentation of the background to her research, the structure of the book followed by some extracts from the text. Those present commented on how they enjoyed the insights the presentation provided into the lives of these long-ago communities. An enjoyable afternoon tea was served while Helen signed copies of her book.

MLA Mr Peter Crisp was present and mayor of Mildura Glenn Milne, and many descendants of lock-building families, some of whose stories are part of the book’s oral history, were also in attendance. 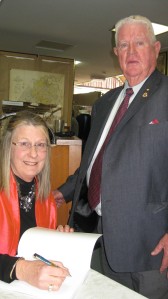