After lunch, we set off by car and found the Beribee Homestead which would appear to be the headquarters for the National Park.  It was all locked up but Lloyd tried to find somebody to see if we could in fact obtain access to the Lock 7 camp, but in vain.  We saw the old wool shed on the property which most likely was a hive of activity during the lock construction period; it made me think that the people on this station at that time would have actually been neighbours of the lock camp although not really  close.

From there we headed back along the Old Coach Road towards lock 8 and detoured inland towards the River through some very picturesque country literally teeming with kangaroos and emus.  We had very close encounters with both a young emu and kangaroo.  The redgum forests near lock 8 are very attractive.  I got out and took some photos on the Victorian side of the river at lock 8 and enjoyed watching the pelicans which were looking for fish on the downside of the Weir.  Lots of waterbirds were in fact looking for a feed in the swirling waters. I got out my sound recorder here and  I recorded the sounds  to try to imagine what my lock communities would have heard: swirling water, kookaburras, magpies and other birds, as well as crickets, cicadas etc.

We then travelled back on the Coach Road through the gate into the Kulnine property where the first thing I noticed was a grave under a thicket of Mallee trees.  The grave was surrounded by a wrought iron fence and had an ‘appeal’ that drew us to investigate.  Mrs. Ralton and her two children drowned nearby in the river in 1910 and here lie at rest. 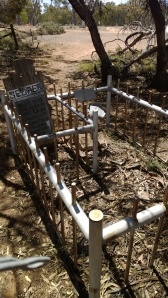 We were surprised to find that there was a geocache hidden in the tree nearby.  In fact there were a number of Geocaches all along the Old Coach Road that we had not known about.For a quick look at the hobby of geocaching, check this link:

After a quick visit down to the river at this site we continued on our way to Lock 9.  The intention was to at least wander through the bush where the Lock 9 camp site had been.  However we stopped to take some photos of the lock and also of the plaque denoting the supposed site for the Lock 9 school (which I believe may be incorrect.  It seems more likely that the school would have been closer to the lock camp.) Just then one of the lock staff Steve approached us and I realized I had met him on a previous visit.  We engaged in a lengthy discussion about my research and he shared with me different finds that he has made at the sites.  It was he who had given me a Meccano piece and the button which he had found at Lock 7 on a previous visit, and he told me now that he had found an old iron at Lock 7.  He also had a very ornate and interesting spoon that he had found at the site.  He brought these out to show me and I took some great pictures!  Another lock man  came over and he too became  involved in the discussion of life on the locks.  These two men are still employed by SA Water under South Australian wage and work conditions as are the staff at Lake Victoria.

Then Steve took me into the house to show me a 1926 beer bottle that he had found at the Lock 9 site.  In those days they had to literally knock the top of the glass neck of the bottle to open it. He also showed me a cabin in his backyard which had formerly been used by lock men at various sites.  Although it was of more recent vintage than the cabins used during the construction period, I quickly poked my head inside and realized the hot and humid conditions that must have prevailed for those living in these cabins.

We set off for home after a very long day.  Although I had not accomplished what I had set out to do, I nonetheless, had an interesting and productive day. 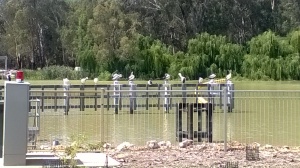 Pelicans watching for a meal at Lock 9.